Before I start, I would like to direct my story especially towards those few nervous souls out there who still remain hesitant about embarking on this once in a lifetime opportunity. I emphasise that this specific audience pay close attention to my experience, particularly because I too was overcome and bogged down by nervous anxiety before committing to the Projects Abroad experience. I am aware that everybody becomes hesitant or anxious before a big occurrence, however, my intentions are to minimise said feelings by sharing my own in order to make your experience abroad that much better.

It was no more than six months ago that I graduated from D’Evelyn High School in Denver, Colorado, yet I still felt unready to begin the next chapter of my life – university. Not that I was ill-prepared by any means, but rather because I lacked the motivation and enthusiasm to sit through another four years (at least) of schooling. However, there’s not a lot that an 18-year-old kid wielding a high school diploma can do… until a friend introduced me to Projects Abroad.

At first glance, I completely rejected the idea of travelling alone to a foreign country, due to the fact that I believed it to be a commitment too great and a jump too large for the timid, insecure boy I undoubtedly was at the time. But after much thought and many discussions with my parents (whom, by the way, encouraged me on this endeavour), I fell in love with the idea of taking a year off in order to study medicine internationally and soon after I was off to Córdoba, Argentina. In fact, shortly after I had arrived and began work down in Argentina, I loved the medical project and volunteering to such a great extent that I immediately booked my second trip through Projects Abroad to Peru, which I am ecstatic to embark on in the spring of 2018! Anyhow, now that I have established this vague image of myself in your mind, allow me to elaborate on why I claim my experience with Projects Abroad to be a once in a lifetime opportunity.

I find it most appropriate that my story begins with a description of my living quarters and accommodation, as it was my first impression of the Argentinean lifestyle and its people. After ignorantly giving my taxi driver a hefty tip for my ride from the airport and reacquiring my luggage from the trunk, I was immediately greeted by a lovely Argentinean couple who graciously welcomed me into their humble abode for my three-month stay. Although a bit older than I had anticipated, Isabel and Toto, my host family, were two of the most welcoming and delightful human beings I have ever met… and that was my impression of them just after the first day!

In fact, during my first few days down there, I informed Isabel that it had completely slipped my mind to pack a jacket for my trip. In response, she took off her jacket and told me that it was mine for the remainder of my stay. She even refused to take it back despite my many attempts, an example of my host family’s endless kindness! I really could not have asked for a better host family!

As for my living quarters, it was definitely not what I had expected (in a good way). Yes, it was slightly smaller and less furnished than I was used to back in Colorado, but it was this lack of unnecessary things which made me realise what we truly need in our everyday lives. And to a greater extent, my Argentinean accommodation gave me a deeper understanding of what "home" really means. In the eyes of my host family, and most other Argentinians I met, home is merely a common place to eat with loved ones and sleep. I quickly found myself admiring this Argentinean lifestyle, which emphasised the importance of family and culture rather than material wealth.

Now I would like to describe my experience in the medical programme serving as a volunteer in a local children’s hospital in Argentina, and how it has affected me. Having spent three months in the Hospital Pediátrico del Nino Jesus, I can most definitely say that I have acquired medical knowledge I would have never thought of experiencing at the age of eighteen. While shadowing the kinesiologists during my first two weeks, I was a little shy, intimidated, and to be perfectly honest, a little scared. Everyone around me spoke Spanish at a level far beyond the level that my small high school had ever taught. In addition to this, I worried that my trip to Argentina would be a giant waste due to the fact that my Spanish was a bit rudimentary. Although it was frightening, once the first two weeks in the hospital had concluded, I felt like a completely different person. Not only had my Spanish improved immensely, but I also grew much more confident and reassured that my volunteer trip to Argentina would not be a waste of my time.

Equipped with a basic knowledge of Spanish grammar, I began putting myself out there and reaching out more. For instance, I would ask the very kind, caring, and helpful kinesiologists all about "moco" (mucus) and the many respiratory issues present in most babies. In response to my bombardment of questions, the nurses kindly answered each and every one of them at a level of Spanish that I was able to comprehend. After the two weeks had come to an end, I left kinesiology, not because I grew bored of it, but rather because I was curious about other departments in the hospital.

Towards the start of my second month, I nervously stumbled across the "quirófano" (operating room) where I was given the opportunity to shadow surgeons. I say "nervously" because my dad once had a passion to study medicine until he witnessed his first surgery, which, let’s just say, did not go so well. During my first surgery, one of the surgeons informed me that the objective was to remove a metal wire ("una lambre") from the patient’s kneecap. As the surgeons began performing several incisions, to my surprise, I felt absolutely fine!

Studying the medical practices of the surgeons in the quirófano was by far the most interesting part of my time in the hospital. Similar to the nurses in kinesiology, the surgeons were very friendly and eager to answer every question I had regarding the surgeries. I remember on my second day in the quirófano, I had accidentally forgotten to put on a hair cap. When one of the surgeons came over, I expected a sharp scold, but instead she kindly reminded me of the appropriate attire to wear while in the quirófano.

Walking around the hospital to and from the departments, I found the environment to be very welcoming and friendly. When I saw nurses in the hallways, they always returned my wave with a warm smile. The patients, who so kindly allowed me to observe them as they were given a diagnosis, were also very kind and friendly. My three months spent in the Hospital Pediátrico del Nino Jesus was an amazing opportunity to expand my knowledge of the medical field and also improve my Spanish speaking skills in a friendly and warm environment.

Alongside our respective work programmes, the volunteers of Projects Abroad were also given the opportunity to serve the community once a month. I was a three-month volunteer, meaning I participated in three community days, however, I would like to elaborate on just one of them, which I will never forget. This is a little how it went. Although I spent most of the community day wearing drenched clothes, thanks to an unexpected downpour just minutes before, our service to the homeless was unforgettable and a truly amazing experience. Upon arriving, we (the volunteers) were given the task of assembling tables and displaying clothes, shoes, and food for our homeless guests.

As I sat organising a variety of different shoes from biggest to smallest, I grew more and more anxious, worrying that our guests would feel dissatisfied and disappointed after seeing the available shoes on the table in comparison with the much nicer shoes on all of the volunteers’ feet. I worried that my Nike shoes might degrade our kind gesture of supplying them with slightly used shoes. Fortunately, I couldn’t have been more wrong.

As the room filled with people in need of clothing, I began distributing item after item to the homeless. Not only had each and every one of them thanked me after receiving each item, but they were all so grateful and appreciative, as well. Two hours had gone by, and my mind-set had completely changed. I conversed with a man who loved the art of blowing bubbles and spoke with a woman who loved nothing more in the world than her young kids. The point being, all of these people facing hardships in their lives are just like you and me. Serving the homeless for my community day taught me the importance of giving back and just how appreciative someone can be when you are doing a good deed. Serving the homeless, and ultimately the community, while in Argentina was an absolute privilege.

And finally, I would like to close this collection of my greatest memories in Argentina with a short statement to thank the Projects Abroad volunteers and team in Córdoba for everything they’ve done for me and with me. From the moment my Volunteer Coordinator, Cristian, picked me up from the airport, to the many office conversations I had with Silvina (the Care Project Coordinator) to better my Spanish, to the final day of saying goodbyes, I couldn’t have asked for a greater group of people to guide me.

And to all of the kind volunteers that I was so fortunate to be able to spend my three-month trip with, I thank you. Calling the other volunteers family is an understatement. I’ve made so many unforgettable memories thanks to them, and when I imagine what my trip would have been like without them, it gives me chills. Thank you for the wonderful memories, Projects Abroad staff and volunteers. You have left a special mark in my life forever. 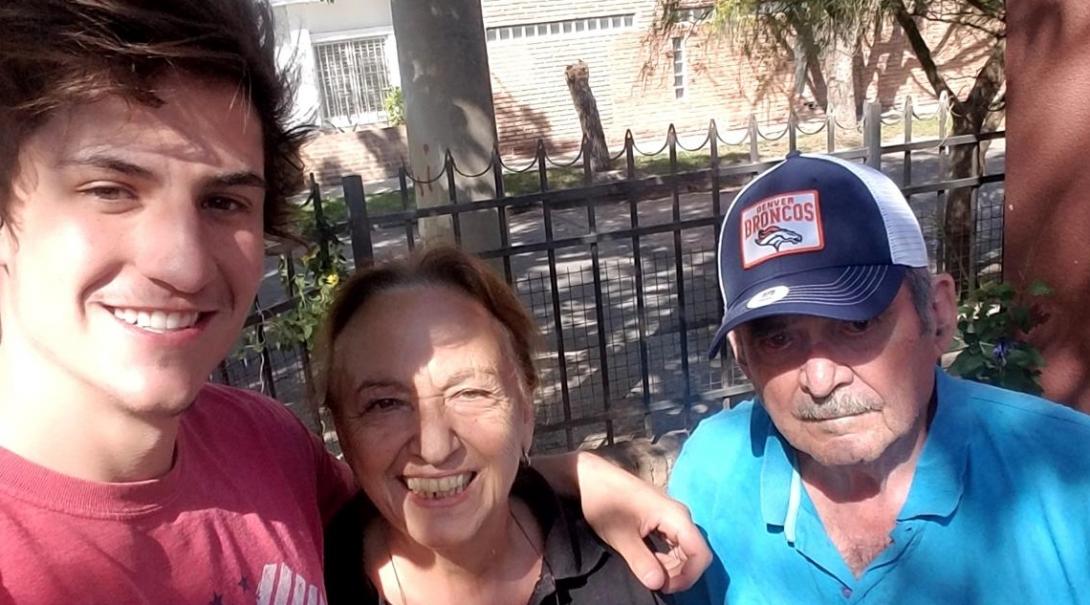