Review: Journalism in Mongolia by Natasa B

“I’ve had the time of my life, and I owe it all to you…” These were some of the last words that I heard in Ulaanbaatar on my taxi ride back to Chinggis Khaan airport, after spending 3 months of my summer in Mongolia. Ask me less than half a year ago about the country, its distinct culture and traditions or its language, and I certainly would not have had even the slightest clue. However, coming home after an unparalleled experience, I know a world more than I ever did before. Now, if I were asked about Mongolia, I wouldn’t know where to start – the countryside? The capital city, Ulaanbaatar, or ‘UB’? The customs, which at the beginning were so foreign to me?

For now, I’ll start with why I ended up in this country which, on the way there, took around 20 hours by plane. 20 hours away from my hometown of Ottawa in Canada. Itching to become a professional TV reporter or anchor, I was determined to gain more experience in the journalism field as I entered the field years of my Bachelor’s degree. I applied through Projects Abroad to complete a 3-month journalism placement in Mongolia from May to August 2013. Not only had I never been to Asia before, but I also figured that I would be able to learn a lot from working in media in a country where freedom of the press is a much newer concept. After much back-and-forth communication, I found out that I would be working at a television station founded in 2006 in the country’s capital. Eager, extremely excited, but also quite unaware of the specifics of my duties there, I left Canada and all that I knew behind for the start of my internship in The Land of the Blue Sky.

Understandably so, being in a foreign country required a lot of adjustment on my part. Needless to say, it was not a piece of cake getting used to the new language and to living with my host mum who spoke only Russian and Mongolian. Nor was it easier getting used to the Mongolian culture because it was nothing like anything I’d ever known. For example, unless there is no chair or table around, Mongolians never place their bags on the floor. Another interesting cultural tidbit is that you should always touch somebody’s hand or forearm if you have accidentally stepped on his or her foot. Indeed, a stark difference from back here in Canada where a simple “sorry” would suffice.

One of the first things I noticed in this new country was the traffic. I must admit that I was actually scared to cross the road at times. The sheer amount of cars, especially in the first few weeks after arriving, stunned me, not to mention the lenient use of the car horn and a lesser degree of yield towards pedestrians. Another thing I noticed was the prices. While I did not find clothing prices in stores to be cheap at all, I did find many food prices to be reasonable - quite reasonable. Meals that I used to eat at the supermarket’s cafeteria close to my workplace would typically cost me as little as $1.20 (if I ordered only rice and a carrot salad), to around $2.50-$3.00 (for a meatball or fried chicken dish complete with rice, potatoes and a small salad) to $5 (the one day I decided to splurge on the fried beef dish).

I certainly came to Mongolia with a purpose greater than experiencing the so-called ‘thrill’ of crossing the street or examining price differences – I was there to work. On my introduction day, I was presented with my first assigned duty: anchoring a weekly English News program that I was told would air on TV on Sunday evenings, on the website infomongolia.com, as well as on one of the Mongolian airlines. I was thrilled from the moment I heard about this, and throughout my placement, I worked on such segments as those highlighting the first major American franchise to come to Mongolia (KFC), the opening of the temporary dinosaur museum in the central square, as well as events surrounding the national festival, Naadam.

I assisted in both the News and Program departments and after a few weeks of working there, one of my supervisors proposed an idea of making a program about nomadic life in Mongolia in which I would take on the role of journalist. Thus, it was on: when all was decided, we were to visit and stay with a family of nomads in one of Mongolia’s 21 provinces, around 1,100 km west of our home base in the capital. It turned out to be Destination Nomad, a 30-minute program with English and Mongolian subtitles, so that speakers of both languages would be able to understand.

Before leaving, much thought was put into the types of questions that I would be asking the family, the more casual style of reporting that would be required, even potential action shots such as milking the herds and exploring the surrounding area near to where the family currently lives. Once there, it was without a doubt the most mind-blowing experience of my life! To paint the picture a little better, we travelled two hours by plane to Zavkhan province, then under an hour from the airport to a city (where we stocked up on food, water, toilet paper, and gifts for the family) and then another approximately 4 hours to reach the family home, or ‘ger’, where nomads live in the countryside. In fact, on this last lag of the trip, what I expected to take about one hour actually took four because of the very bumpy road conditions, forcing me to constantly hang onto whatever I could in the car to maintain my balance.

When we finally arrived, it was so late that the sky was pitch black, highlighting the beady eyes of the goats and other herds because they were the only parts of the animals that could be seen at that time of night. It was a black sky without any shop signs or streetlights to shine light on anything: some difference from the bright lights of Times Square in New York City that I had visited only two years prior! It was extremely cold outside despite it being the end of June. Watching the family get their water supply from a nearby stream and noting how they cared for herds amounting to around 200 animals, was only a small part of what I got to experience over the 5-day trip. In such a technology-heavy society like back home, it was a breath of fresh air giving my contact details to the 15-year old daughter of the family who told us that she would try to get in touch when she opens an e-mail or Facebook account. Wow – thinking about how many times a day I refresh my e-mail account that I’ve had for about 10 years makes me wonder how someone could just simply not have an e-mail address.

I learnt a lot and was so fortunate to have met such a welcoming family, but the learning experience was only half over when we left Zavkhan. The post-production process of editing brought with it a lot of thought, planning, and selection – even one ‘sleepover’ at the office to meet our deadline. This editing experience continued over to English News segments as well as the second program I helped with – Watered Out. This program, indeed about water, was designed as a two-part program totaling 40 minutes and focused on causes and effects of water scarcity in Mongolia, as well as solutions to this problem including examining Israeli innovations in water technology.

Aside from this, I also attended other events with NTV staff such as a fashion show and the opening ceremony of the Mongolian Darts Federation’s competition. What I didn’t expect I would do was dance, another passion of mine, but as with virtually all my other expectations, this one was also knocked right out of the water when I performed a piece from the ballet Swan Lake with a Mongolian girl at a Projects Abroad fundraiser for disabled children.

There are many, many lessons I learnt from this trip, both personally and professionally. To start on a bit of a lighter note, came to learn just how great a variety of toilets exists. Aside from the usual toilets in homes or offices, in the countryside (where no piping exists) I saw two alternatives. One was a ‘stall’ with a simple hole in the ground and a wooden plank on either side, and the other, well, no hole at all. Let’s just say that for this second option, nature serves more than one purpose…

Professionally, I learnt tips for putting together a news piece, advice such as the ideal numbers and length of sound bites, editing skills, not to mention interviewing techniques. Something else I learnt, both in theory and in practice, is how important it is not to be sensitive, but instead to accept criticism and try to avoid repeating such mistakes in the future. Finally, on a more personal note, I learnt to step out of my comfort zone in a difficult situation that I’ve never before had to face: going to a new country only to realise you’re starting to live with someone you don’t know and cannot easily communicate with because of the language barrier. Though this got better with time, still, the main methods of communication were four-fold: a combination of a Mongolian/English dictionary, Google Translate (from Russian to English and vice versa), animated hand gestures and of course, a bit of English and a combination of Mongolian and Russian words - ‘Mong-ussian’, perhaps??

Though there are many experiences in my life that I truly value, this one surpasses all because I was able to really get the feel of the life of a journalist whilst living in a culture that, despite all its differences when compared to my life in Canada, really began to grow on me. And when I am asked whether I would ever go back; I have but one word to answer: YES! or ‘тийм’ in Mongolian. Why? As for those words to the song on the radio in the taxi to the airport, they sum it up perfectly: “I’ve had the time of my life…” 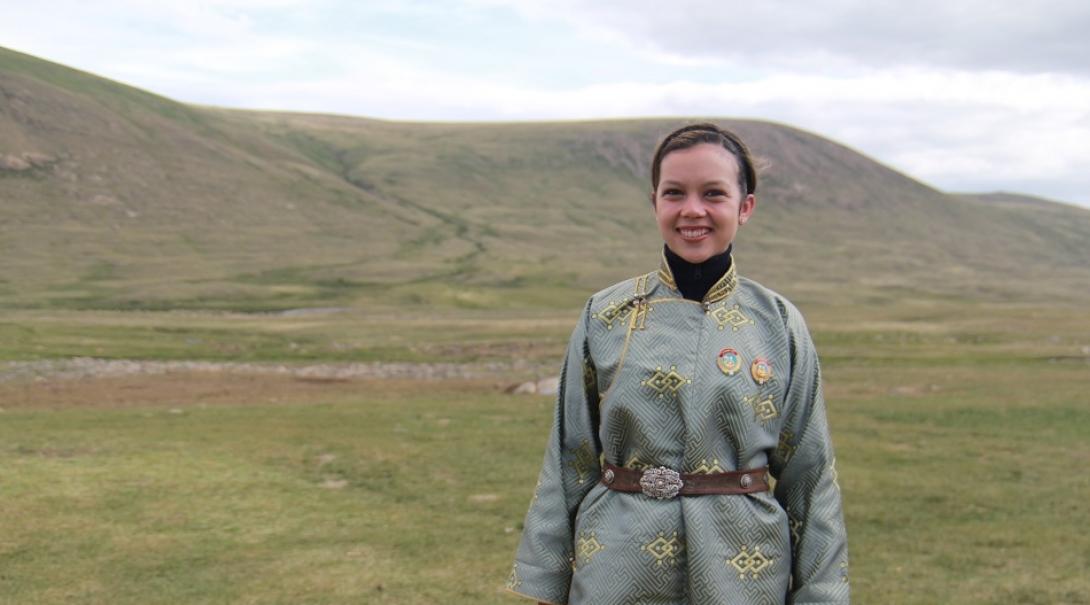