Review: Childcare in Ghana by Katy A

Why I chose to work with children in Ghana

During my university course (primary education), between the 3rd and 4th year, they offer us a two-week gap to work with children outside of a British primary school setting. I’ve always wanted to volunteer in Africa and with the help of funding, I was given that opportunity.

It was important to me (and my parents) to travel with an organisation that offered security and safety as well as the opportunities once in the country, and we felt Projects Abroad offered us that. After about half an hour on the website and a bit of Google searching we had settled on Ghana as the country to choose.

So seven months later (and they were a very long seven months), I’m sitting in the departures section of Heathrow’s Terminal Five. Having just said goodbye to my Dad, I am entirely aware I’m about to venture to a foreign country completely alone and this thought is quite overwhelming.

However having managed to get myself to the right gate and on the right plane, I’m feeling a bit more confident.

Arriving at Accra airport around nine hours later and experiencing the rush of heat after leaving the plane and having a bit of last minute nerves wondering whether anyone would be there to meet me on the other side, everything turned out fine. I don’t think I’ve ever met such an enthusiastic person as Nyame, who met me at the airport and promised us we’d beg our mothers to join us over in Ghana!

After a sleepless first night in the guest house in Accra, we were woken at some ridiculous time in the morning to get the bus out to Cape Coast. I definitely felt a mix of emotions at this point - a package of both excitement and nerves.

When we arrived in Cape Coast we went straight on the rounds to drop us at our host’s homes. I found out the other girl who was supposed to arrive the day after me had cancelled so I would be on my own in the host’s house. I found this hard to begin with when the other volunteers had others at their host families. However, I feel this helped develop my sense of independence.

My placement was at the nursery school. I was primarily helping build a new classroom block but I also got the opportunity to teach English and Maths to the children. I can honestly say I’ve never done manual labour like it. In searing heat, little shade and only bags of water to drink from it seems easy to not put 100% in. But when you’re actually there you forget your own sunburn and really get involved. I was definitely made to feel involved and that my work meant something, even only being there for two weeks!

Interacting with the children was a very different experience to what we do in Britain. The children were so open to us and all they wanted was a hug or a piggyback. In the UK this is pretty much banned and can land you in serious trouble. I found it hard to begin with to adjust and telling the staff at the school about these rules in the UK was difficult to explain! They found it ridiculous!

My free time was spent wandering round the town, hanging out with the other volunteers or chilling out at my house. We often went to the local bars or even went to a beach and pool party. At the weekends I explored the local area, which included a rainforest canopy walk in Kakum National Park and looking at Cape Coast castle (checking it was suitable before Obama arrived!).

The people of Ghana are very friendly, you become accustomed to everyone in the street stopping you to say hello and I missed this once back at home. I, being a blonde female, also gained a lot of male attention (I was pre-warned about this in the introduction tour). I got 19 marriage proposals in 14 days; not a bad result! One thing that I loved was that none of this was sinister, just friendly banter!

Me being me, I enjoyed browsing the market stalls and loved getting to know the stall holders. I was introduced by another volunteer to the idea of buying cloth and getting a tailor to make dresses, skirts and trousers. I definitely took to that idea and if I’d stayed longer could have ruined my bank account!

I found this trip not only inspired me to travel more in the future, but showed me things I never knew about myself. I discovered that I’m quite an independent person when I want to be and I can do things if I put my mind to it.

In retrospect I’d definitely say two weeks was too short for me and I would love to stay out there a bit longer. I’ve been totally enchanted by Ghana and the friendliness of its people and can 100% say I will be back in the future! 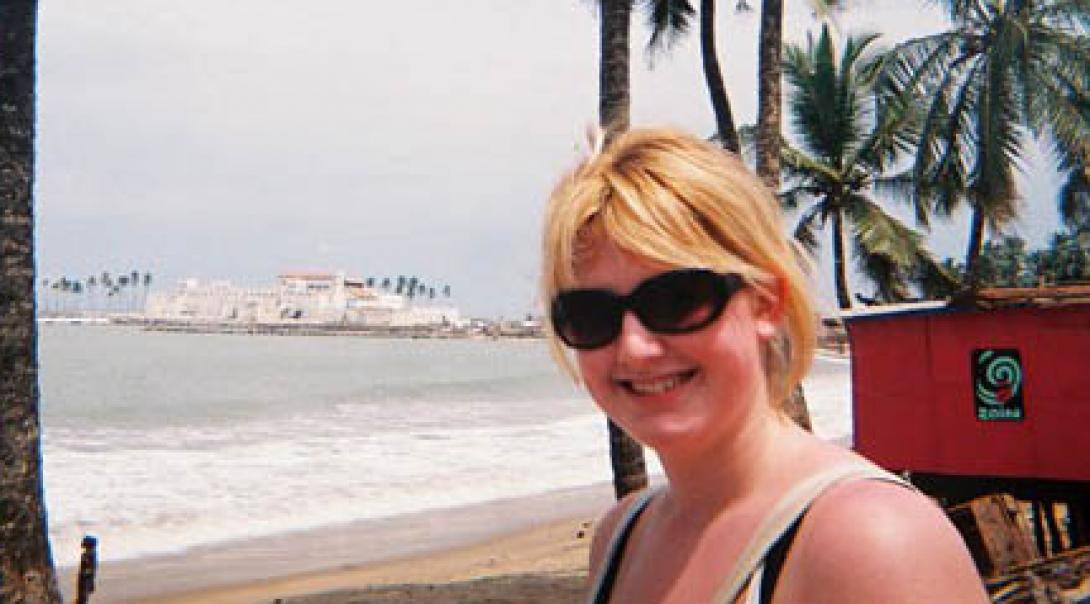