I arrived in Nepal two months after the first earthquake. I had a nice clear view over the Kathmandu Valley as we flew in and I could see many green valleys with rivers winding through, rice fields, corn fields and a golden-roofed temple glistening on top of a hill.

I was met at the airport by a Projects Abroad rep and driven to my hotel. On the way, I wound the window down to let in the noise and some fresh air. I was met by another rep, who took me to a money exchange and to a local phone shop where I picked up a local sim card, which made me feel like a proper local. In the afternoon I went for a walk around the area, where I couldn’t help noticing that I was the only westerner. I realised then there was another effect of the quakes apart from all the damage and devastation – Nepal’s tourist industry had almost completely disappeared.

The next morning I was driven to the bus station where I was put on a tourist bus for Pokhara. I saw more signs of damage as we drove out of the city. But as we headed west through the Kathmandu Valley the country became very green, with many rivers and streams all practically bursting thanks to the monsoon. We passed corn fields, rice paddies, and several people on bicycles piled high with all manner of fruit and produce to sell.

In Pokhara I was given my induction to the conservation programme and then the next morning my jeep arrived to take me up into the mountains. For about 2 and a half hours we wound our way up the treacherous road, until finally we reached the Jeep checkpoint, which was as far as the vehicle could go. A porter, which turned out to be a little old lady, took my bags and led me further up the mountain, along a narrow, uphill path that can only be accessed by foot or by animal. Finally, after 2 hours, we climbed over a wall, across a field, through someone’s back yard and up a last, steep set of stairs, and emerged at Panorama View Point Lodge, in the village of Ghandruk - my home for the next three weeks.

For the first week there were only four of us volunteers, along with Raj the project manager, his parents and Jamuna our cook. We were like a small family, and I never got tired of waking up and looking at the mountains every morning. I was there during the monsoon, so it rained a lot, and most days were cloudy, but on the occasions that the sun came out and the mountains showed themselves, the views were spectacular! We all got used to having our waterproof gear with us all the time and putting it on very quickly, and pulling the leeches of our legs and ankles at the end of the day!

Each day we would follow Raj off into the jungle with our binoculars and clipboards, to set and check camera traps, record birds or take photos of butterflies. We even went out at night to survey amphibians in the village. It was always fun to check the cameras to see if we had anything! Mostly we got birds, buffalo and barking deer, but on my last day we were rewarded with footage of a common leopard! Most days we got back just in time to beat the rain, with Jamuna and her big smile to tell us that our lunch was ready, and Raj’s mother Ama to tell us off if we didn’t eat it all!

Once, we went on a three-day hike to survey local birds. The first day was all uphill and I found it very hard going, hiking up over 1,000 metres in one day! It was great to see some other towns and experience a bit of what trekking in Nepal is like. We saw the villagers often, carrying heavy baskets of leaves and branches they’d gathered in the jungle, sometimes just walking with their children, and always ready with a cheery ‘Namaste’, and then a ‘Namaste’ from us as we passed.

For me the hardest part of the project was the physical effort of hiking over the mountains every day, going up, down, up and down at 2,000 metres – I don’t think there is a flat path in Ghandruk anywhere, unless of course it’s ‘Nepali flat’ – a little bit up, a little bit down! But it was worth it to live in that beautiful place for a few weeks, with the peace of the mountains, the warm welcome of the villagers, and the chance to explore a part of Nepal that regular tourists can’t go – the Himalayan jungle. And of course the friends I made there – by the time I left there were still only 6 volunteers, and there’s not much to do in Ghandruk other than hang out together, so we became very good friends!

When my three weeks were up it was time to head back to Kathmandu for the second phase of my adventure – Disaster Relief. I was sad to leave, I would miss the peace and quiet of the mountains, but at the same time I was looking forward to getting stuck into the project and getting my hands dirty.

Every day after breakfast we would lace up our work shoes and walk down to the main road, practice our road-crossing skills, and wait to be picked up to be taken to our work site, a small school in the Kathmandu Valley where we were building new classrooms in a former rice field. Something like 22,000 schools were destroyed in the quakes, so it was great to know that children who had their education disrupted would be able to return to lessons again when we were finished. It wasn’t easy though, we had to build the foundations from scratch and we were working against the monsoon – several mornings we arrived to find a flooded and muddy worksite, and it wasn’t long before my back and legs were aching again! But the optimism and enthusiasm of the team leaders and other volunteers was amazing and we carried on every day with lots of smiles and encouragement!

In our free time there were lots of opportunities to explore the city, although there were still many areas that were off limits due to earthquake damage. It was heart-breaking to see so many of Nepal’s national treasures reduced to mud and rubble. The strength and resilience of the Nepalese people was truly inspiring – after everything they’ve been through, I never heard one person complain or despair, they simply got on with life with a smile and always a friendly greeting.

For me there were many highlights, but the top of the list would have to be living in the Himalayas, surrounded only by mountain, jungle and even the ever-present monsoon mist, which gave me a unique glimpse into mountain life that ordinary tourists would never get to see. Equally, the satisfaction of seeing a school being built before our eyes, knowing that there were children somewhere who were getting their education back thanks to our hard work.

For anyone thinking about doing either of these projects, the only thing I have to say is: “Go. Nepal is waiting for you.” 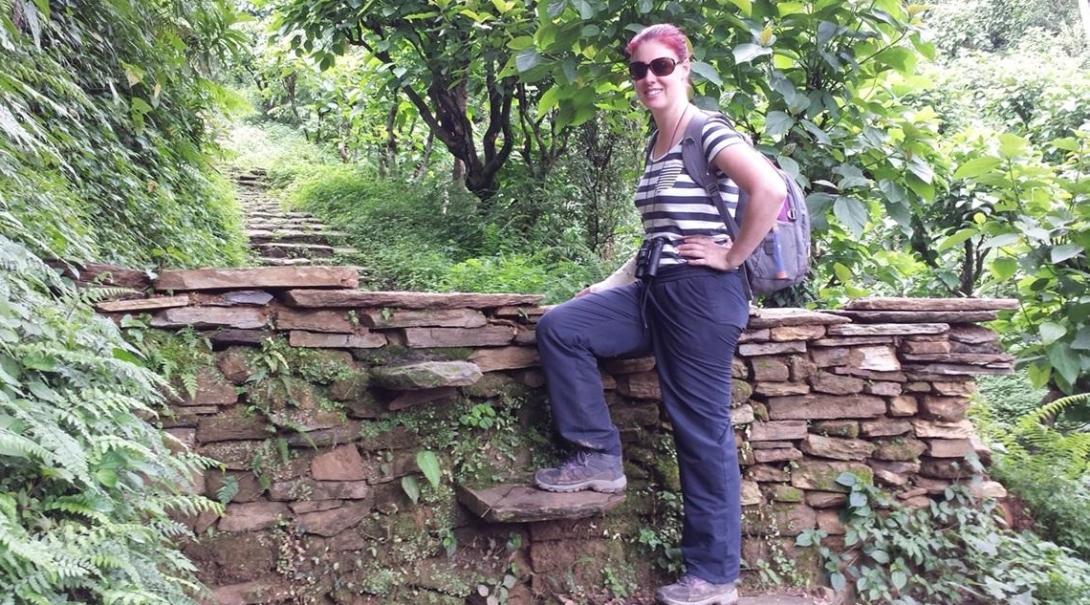