Why I decided to volunteer in Sri Lanka

I chose Sri Lanka because there are endless things to see and do, from their array of beaches to wonderful temples and diverse wildlife. I chose Projects Abroad in particular as I felt like they could offer me a lifetime experience while being able to see what dentistry entails as well as the opportunity to see what the Sri Lankan culture has to offer, which is exactly what they delivered!

Even though it was my first time travelling internationally by myself, the scariest part of my journey was actually arriving in Sri Lanka as I was in an unfamiliar environment, surrounded by unfamiliar people. However, all my worries were put to ease when I was picked up by my Projects Abroad coordinator. She was very welcoming and got me everything that I needed before leaving the airport for my host family’s house.

When I arrived at my host family’s house, I was greeted with such kindness and was shown around the house before my host mother showed me to the dining table where there was an array of food which could have fed a kingdom. She had prepared rice, fish curry, string hoppers, roti, vegetable curry and more. Throughout my stay, she provided us with even more food varieties and I felt as if I was being treated like a queen.

From the beginning to end, I felt very welcomed and honoured to be placed with such a beautiful family that could accommodate me and the other volunteers with such kindness and selflessness.

I was based at a local hospital where I spent most of my time in the general dental clinic. I was relieved to find that the dental clinic had air conditioning, a luxury which made my stay in the room even more pleasurable. Despite the air conditioning, it started to feel stuffy again due to a large number of people in the room at the same time. It was different to what I was used to seeing in a UK dental practice. So much went on and it was sometimes hard to keep track but I did enjoy the hustle and bustle of it all.

Within the hospital there were limited dental departments, however, I was given the freedom to move around each department as I pleased. I spent a bit of my time in the maxillofacial and oral surgery department (as well as the general dental clinic) which was really eye opening as I was given the opportunity to witness surgical procedures that I would never be allowed to see back in a UK dental practice.

My role was simply to observe the dentists at work and to ask any questions I may have had. The dentists truly made my time on my placement enjoyable because they would always take their time to explain to me the process of a procedure they were doing and sometimes they would even draw diagrams to further illustrate what they were doing while they were giving a patient treatment. This was very beneficial as it allowed me to learn a great amount about dental treatments.

The number of patients that the dentists saw every day (usually over a hundred patients) really shocked me. This is a staggering amount and just goes to show how fast pace the environment really is.

Aside from my dental placement, the other volunteers and I were given the task of providing a hygiene awareness programme to the children at a local school. As a team, we educated the children on tooth brushing, hand washing, mosquito bite prevention and disposal of waste. I loved this task as we were able to educate the children on very important issues. I hope that they will pass it on to their families which will not only help them but potentially the community as well.

Additionally, as a group, we went to medical camps where we administered blood pressure and blood sugar level tests on members of underprivileged communities. It was a very rewarding experience to be able to give back to the local community and know that we made their lives a bit better.

My free time in Sri Lanka

I was very lucky to be placed in Panadura as the area was filled with many things to do, from restaurants and shops to beaches and hotels, you name it! As my placement usually ended in the afternoon, it gave my group and I a lot of time to explore what Panadura had to offer. We spent a lot of our time at one of the local beaches, where some of us would sit and relax at the beach restaurant while others would swim in the ocean. We would occasionally treat ourselves to some sweet treats at Mango Mango a restaurant offering milkshakes, ice cream and more. Additionally, we were taken to a beautiful swimming pool which had an ocean view where we could relax and show off our swimming skills (mine were poor). Of course, while we were there, we indulged ourselves in some cuisine that the hotel restaurant offered.

The highlight for me was when we went on a weekend trip to Kandy, where we were fortunate enough to visit an elephant sanctuary, which was absolutely stunning. We also visited the Temple of the Tooth which was very interesting as we learned more about Buddhism, a religion that is very important to many Sri Lankans. Furthermore, we watched traditional Kandyan dancing and visited a tea and batik clothing factory.

Leaving Sri Lanka was hard for me. It meant I was leaving a country that I had fallen in love with in just two weeks and it also meant that I was leaving some amazing people that I now call lifelong friends. It was a pleasure to be able to experience the culture by living like a true Sri Lankan for a while. I learned a lot about the culture but also about myself. I am really glad that I decided to do my placement with Projects Abroad and I would do it again in a heartbeat. 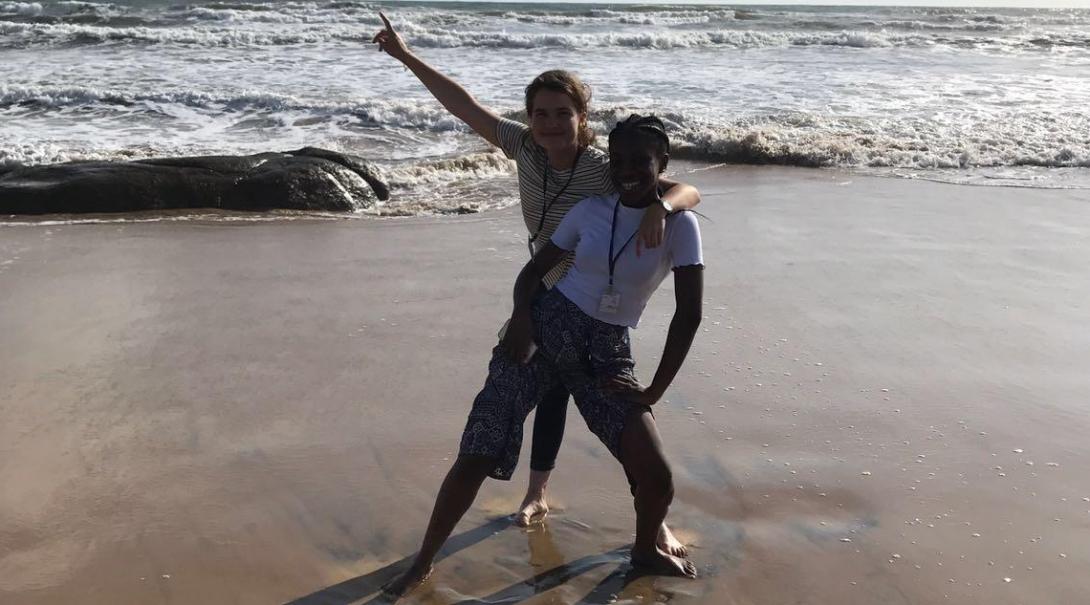