I did a 4-week micro-ﬁnance project in Cambodia in 2017 and had a very enjoyable trip The only small difﬁculty I had was being the sole male volunteer for most of my stay and being so much older than the others! I was therefore excited to see that Projects Abroad were running a Grown-Up Special in the Galapagos in November 2018 and signed up.

The project was due to last a fortnight but I spent 2 days in Quito, the highaltitude capital of Ecuador, before ﬂying on to the island of San Cristobal. And I had a night in Guayaquil, the second largest city on the way back to the UK. 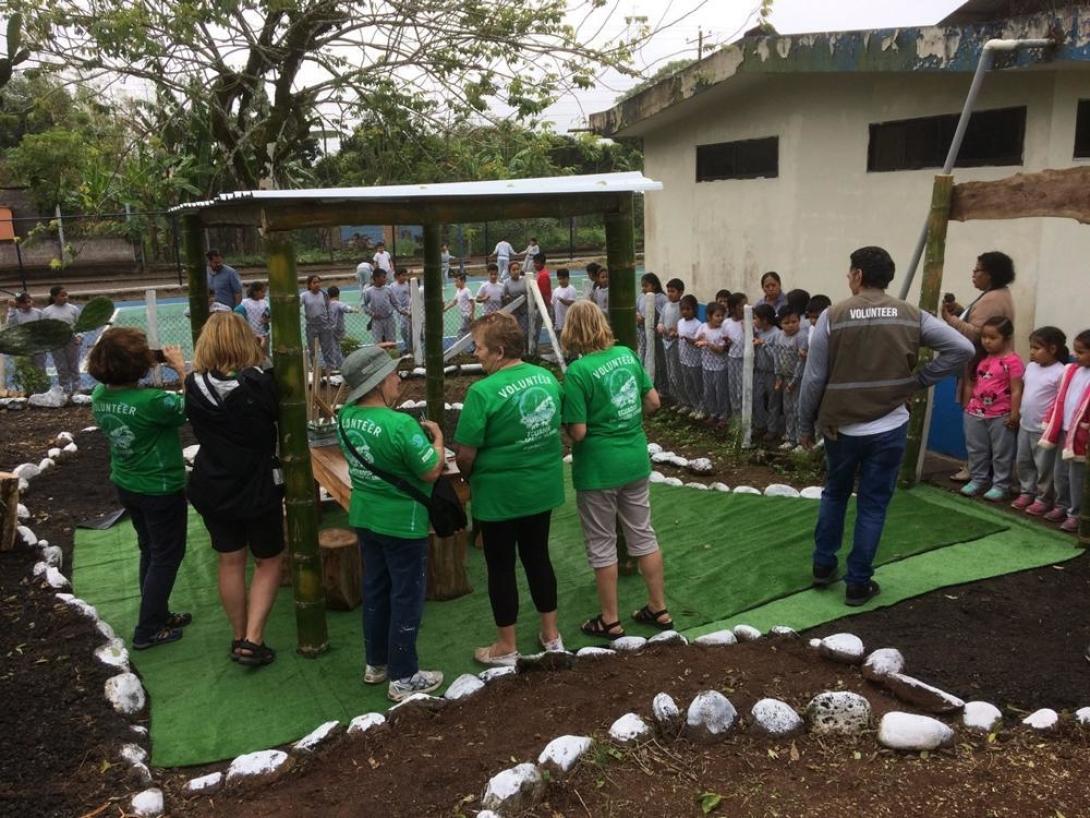 There were 9 of us on the project (2 Americans, 2 French, 1 German, 1 Italian and 3 English) and we were lodged in 3 houses close to each other on the outskirts of Puerto Baqerizo, the main town on San Cristobal. I stayed with the Gil-Salazar family together with 4 other volunteers. Consuelo Gil was very welcoming and besides cooking for us she did some washing and helped me with my Spanish! We spent the ﬁrst week working at the Charles Darwin school in El Progreso, a settlement in the ‘highlands’ about 5km from Puerto Baquerizo.

We heard that the local government had cut maintenance budgets and we were to paint some of the school walls and create a botanical garden with a small shelter for the children. I’ve never been very keen on painting so I was particularly happy to help build the shelter from bamboo which we cut from a local plantation. One of the curiosities of the Galapagos is how localised the weather is: it would be dry when we set off from Puerto Baqerizo but invariably drizzling when we arrived in El Progreso 15 minutes later. It rained non stop on the Thursday so we were lucky to complete the job in time for the hand over to the children on the Friday morning. 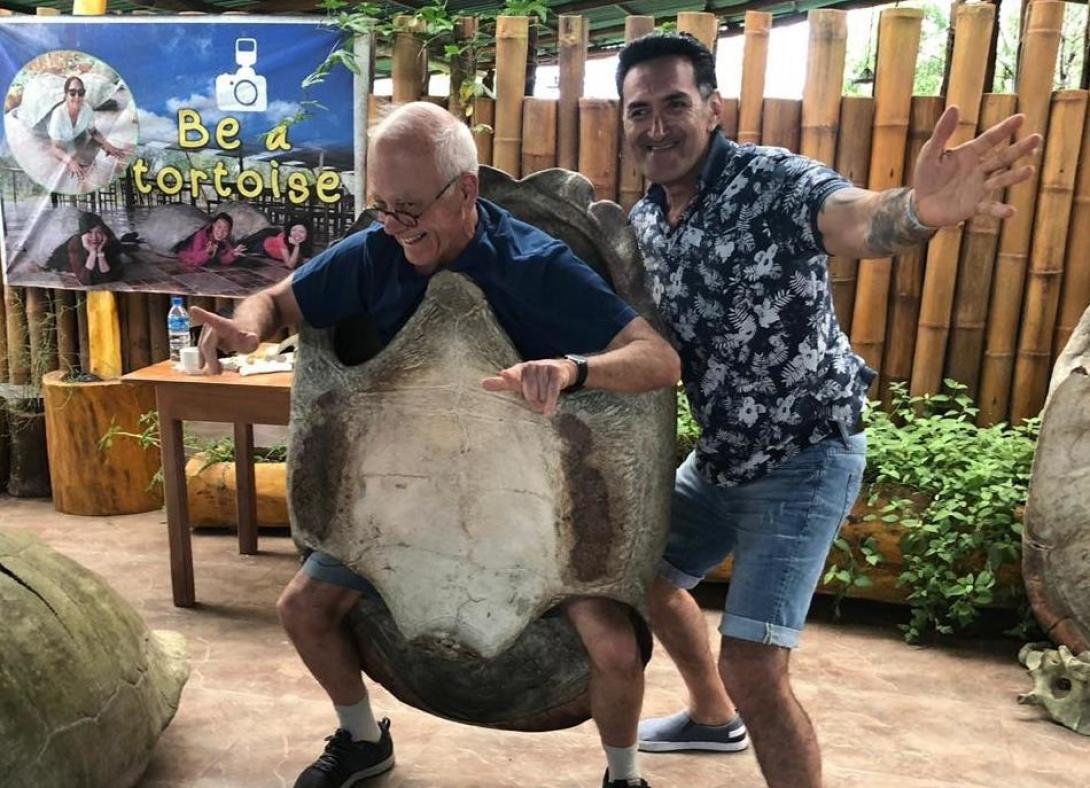 After a week in the drizzle we were in for a treat at the weekend when William Puga, the local PA organiser, accompanied us to Santa Cruz, the main Galapagos island. Everybody survived the 2 hour boat ride in rough seas to Puerto Ayora and after dropping our bags at the hotel we were bussed up to the Gemelos Pit Volcanoes and then to Chato to see the Giant Tortoise reserve and the Lava Tunnels.

It was amazing to see the tortoises in their natural habitat and the photo of me donning a tortoise shell gives an idea of their huge size. After lunch we walked to Tortuga Beach and saw sting rays and small sharks close to the water’s edge and some of us even went for a swim! Dinner at a restaurant near the hotel was most enjoyable and afterwards we walked along the bustling seafront promenade.

On Sunday morning we had a guided tour of the Darwin Research Centre and saw lots more tortoises but the star of the show, though sadly now preserved in a special air-conditioned room, was Lonesome George, the sole remaining Pinta Island tortoise who died in 2012. 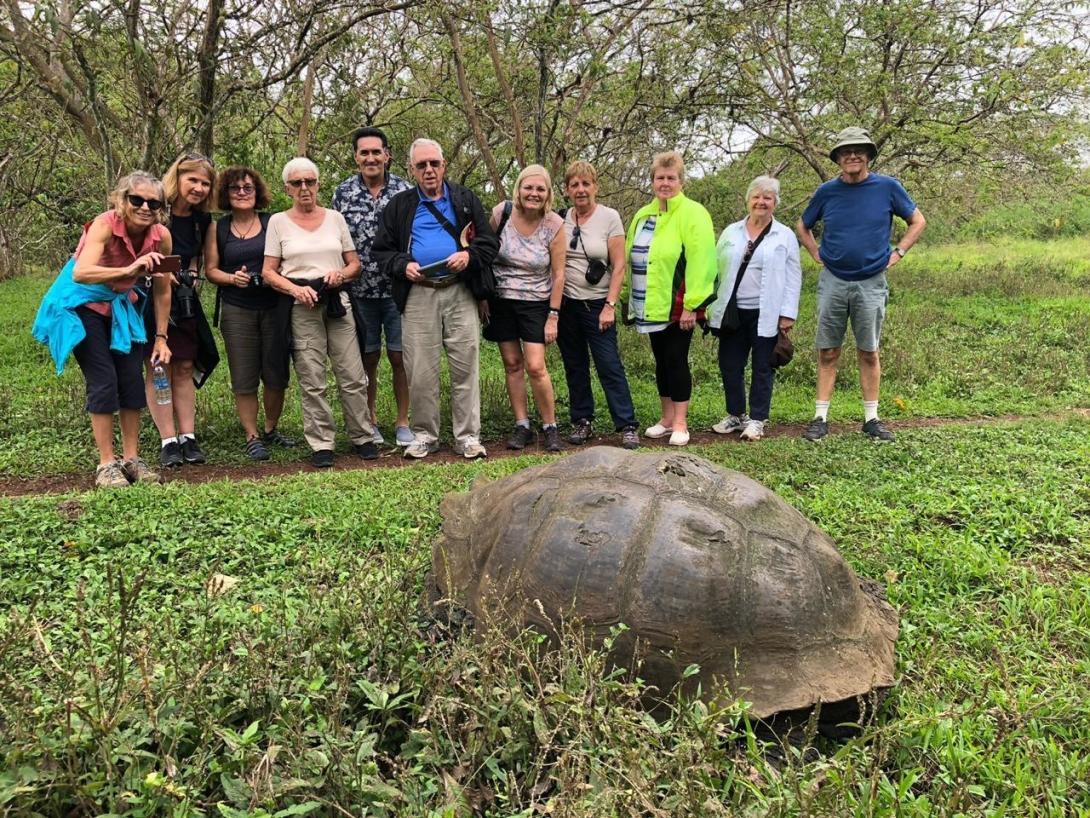 Back on San Cristobal we were in for a shock on Monday morning as we were picked up at 5am to carry out monitoring of sea lions - this involved counting the sea lions on a number of beaches close to the town: no problem counting them but how to distinguish between the males and the females! Back to the house for breakfast and then by bus to La Galapaguera, the tortoise breeding centre, to help clean the pools and feed the tortoises otoy, the indigenous plant that is their staple food.

We were back at the beach that afternoon to record sea lion behaviour - lots of pups playing in the rock pools, older ones waddling amongst sunbathing tourists, mothers feeding their young and the alpha males patrolling their patch and occasionally chasing off a rival. The beaches are an amazing contrast of white sand and black volcanic rock and one of the most extraordinary sights on the shoreline are the marine iguana, a reptile described by Darwin as ‘hideouslooking’.

They are unique to the Galapagos and and can be seen swimming in the sea where they forage on algae - they lie quite still on the rocks and I almost trod on two of them! One of the best beaches on San Cristobal is the Loberia (literally sea lion beach) - I went there with 3 other volunteers early one morning to count sea lions and another day we did a beach clean-up collecting plastic and glass bottles and as many other items that could be recycled. One day I had time to walk to the far end of the beach and climb up the rocky promontory to watch the frigate birds and blue footed boobies. 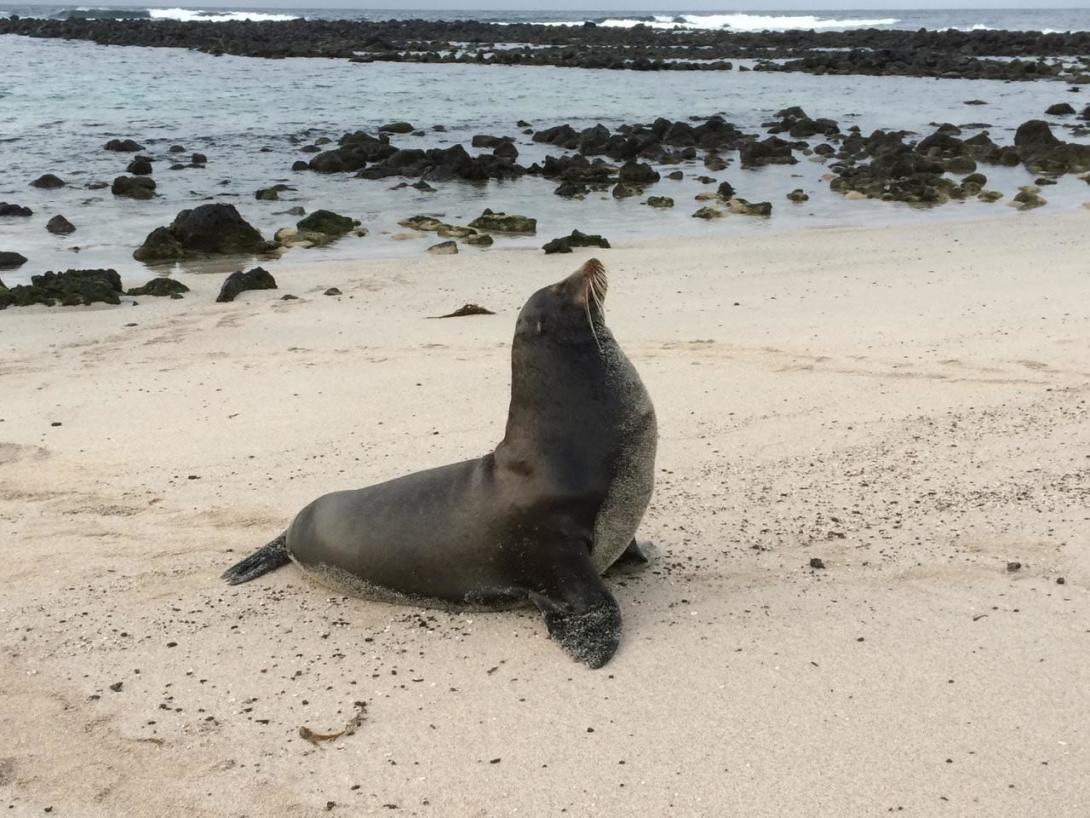 One of the greatest threats to the island ecology has been the introduction of aggressive plant species, such as the blackberry and guava, which together with wild goats and donkeys, have decimated many native plant species. We spent a morning cutting back brambles and weeds with machetes in the 2 hectare otoy plantation managed by PA and on another day worked in the Galapaguera greenhouses tending young endemic plants, part of the initiative to re-establish native ﬂora.

On the last day of the project William treated us to a fabulous 360 degree tour of San Cristobal by boat. The ﬁrst stop at Playa Rosa Blanca turned out to be really special as we arrived at low water which meant that we could walk round a tidal pool and see a group of white-tip sharks lazing on the bottom and witness a billnose turtle swimming round in circles as it waited for the tide to come in. We went snorkelling in the open sea and saw sting rays, sharks and turtles. On another stop we came across 4 fur seals and saw blue-footed boobies.

Our last stop was at Kicker Rock (also called Sleeping Lion) where we snorkelled in the channel which divides the 2 rock formations and hoped to see hammerhead sharks; sadly no sharks but plenty of ﬁsh and a turtle. The project came to an end all too quickly and we had a great barbecue dinner on the last evening hosted by Consuelo and William. And Consuelo’s granddaughter Karla sang for us and we danced! The 2 weeks were a wonderful experience: it was great to see all the wildlife but particularly rewarding to see behind the scenes as volunteers and understand the huge problems faced by the islands, especially the current tourist invasion.