Review: Sports Coaching and Conservation in Ecuador by Ronald S.

At first I had opted for the food project in Samoa. But because Samoa was still closed due to covid-19 I chose another destination. After much thought, I came up with the project as a gym teacher on the Galapagos Islands in Ecuador. Since I have worked a lot with children and also have a sports education and a lot of sports experience (background). I also chose this destination because one of my biggest hobbies is traveling next to sports. And because I have already visited more than 55 countries, and I would like to see new countries.

Working in the Galapagos

Initially when I arrived in the Galapagos Islands I was especially tired from the long journey. But after a few days of getting used to the time difference, I felt completely at home. That was not only because of the staff but also because of the other volunteers who gave you a warm welcome.

The first few weeks I was working on the island I taught taekwondo. I really enjoyed doing this because I've done a lot of martial arts myself in my life. I also really enjoyed having my own group to whom I could transfer my knowledge to. 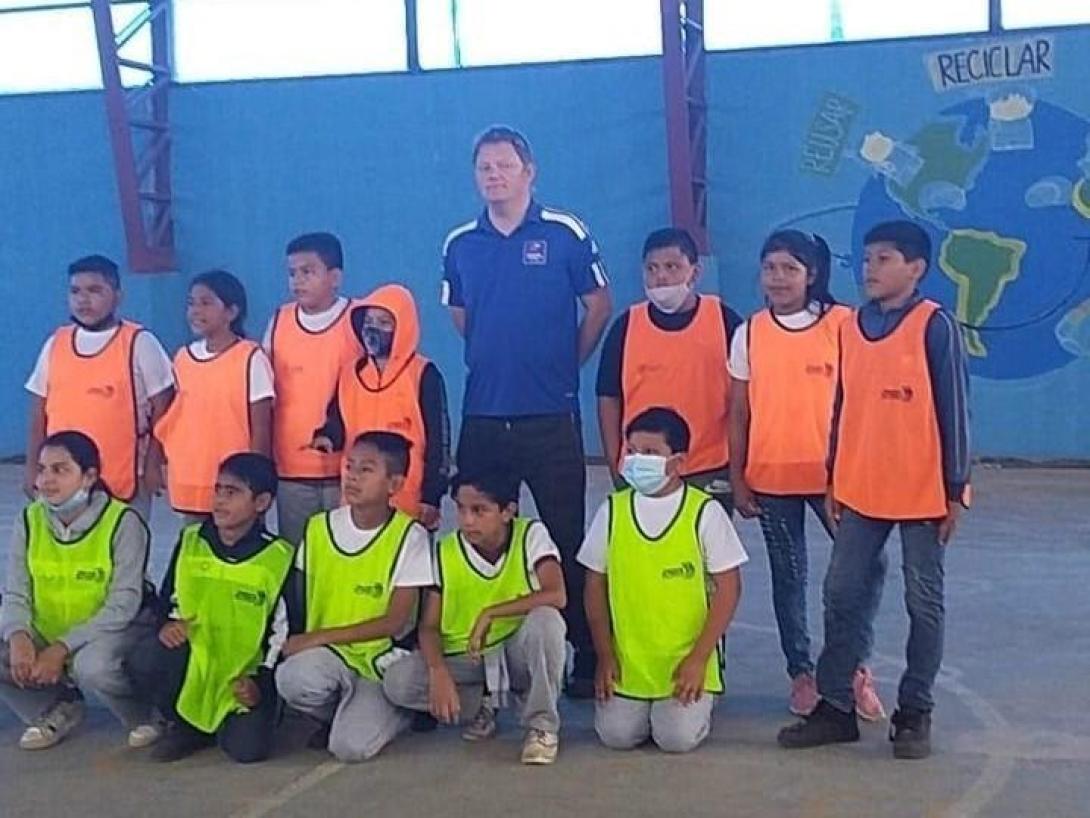 After the summer holidays and the schooling started again, I went to a primary school in El Progreso where I didn't teach as a gym teacher. I taught the children all kinds of Dutch games that we got in primary school when we were younger. For example: different forms of tag, dodgeball, handball and many more types of games and sports. I decided in the mornings to help people with the conservation project so that I could make myself even more useful to the community. During my projects I got to know a lot of people and I have become a friend of them on Facebook.

What I remember of the project at the primary school was the last day I worked there. I held a football tournament with group 7 and group 8 where a prize could be established. The children could win a real gold and a silver medallion. I also enjoyed working with the turtles. During this work we had to snag the plants that the animals were eating with a machete from the plantation in order to take them with us and then feed them to the turtles. You really felt that you were doing something for the island and the community. I advise anyone doing this project to get the most out of it.

During my free time I went on several tours with other volunteers. I first did a tour around the island, the 360 tour, where we saw various wild animals such as dolphins, turtles, sharks and other wild animals. I also went to Isabela with some volunteers, which has the shape of a Seahorse. Here we did a snorkeling tour and we went to the volcano. I also did a Kayak tour once which was fun but also tiring to do. In addition, I regularly went to the city after working hours after dinner to Midori das a shusi tent where I believe they sold the best burgers on the island. You could also take these burgers as a take away, which I have done regularly. What I advise against people is to go to Chris burgers. They have the worst burgers on the island although there were many volunteers who thought they were the best.

What we as volunteers also did a lot with each other was that in the evening after the city we went to play football, basketball or volleyball. We all love sports and really enjoyed doing it because we also had people who participated that we met during our volunteer project. We also went once in a while with all of them to the night club they have on the island. The best part was also interacting with the local people so that you learn your Spanish better so that you can communicate better.

The food on the island was delicious, I always thought our house mother cooked very well. For myself I liked the burgers at Midori the best. What I also always liked was every time when a volunteer left, all the volunteers came together in the house to eat. The volunteers who were in another house also came to our house where we all had dinner with them. They received a booklet in which all volunteers could write something and they also received a wooden turtle or seal from William. The volunteers who were in my house pointed out that you should clean your own plate and cup after dinner. When William came to eat he forgot this or he let the housemother do it. I called him back myself once and let him wash his own plate and cup, and bye he does it himself now!

I also really enjoyed talking to the other volunteers over dinner to talk about different things. And what made it so beautiful and fun was that you had people from different countries. In this way you also learned to learn the different customs of a country and their culture. And in this way you had healthy discussions. I myself work for the municipality of Amsterdam, so when there was political talk I was the one with a firm opinion about things.

During my stay and my trip I never felt unsafe, because compared to the rest of the volunteers I was a bit older and had already traveled a lot in my life. The thing that made it for me is that you could really see how the people on the island interacted with nature. I've volunteered for projects Abroad twice in my life and this was now my 3rd time so I already knew a bit about what to expect.

What has brought me time on this island is that I have thought carefully about what I want to do with my life and what I still want to do in my life. I would like to travel a lot more in my life. I would like to do this when I become a father. I would like to do this with my child and I want to show him the world that I have also been allowed to see with my parents. I also want to do voluntary work with him to show him what it is like to help people in 3rd world countries and what it can do for them. I want to teach my child that you should not only think about yourself but also about other people in the world who are not having it too easy in life.